Polling collapse under Joe Biden’s presidency has reached a point in which networks cannot hide or spin increasingly dire numbers that are engulfing him. On Monday, ABC, CBS and NBC all covered the “devastating” ABC News/Washington Post Survey revealing that Biden received only 38 percent of registered voters’ approval

This is quite a change from last week when all three networks had skipped it. USA TodayA poll shows that the President is at 38%.  Yet on Sunday’s Good Morning America, ABC Political Director Rick Klein didn’t bother with happy talk: “This is a terrible poll for Joe Biden’s Democratic Party. It paints a picture of a party that seems disconnected from the lives of people..”

He added, “Broad perception, more than 62 percent, say that Democrats are not standing for people like them.” Regarding the congressional ballot, he predicted doom: “The Republican candidate has a 51-41 edge among registered voters. We have never seen Republicans with this wide a margin in that so-called generic ballot question.”

This Monday GMAThe story was followed-up with another. Reporter Cecilia Vega alerted that the President is “even losing support among Democrats and independents with approval for his handling of the economy plummeting to 39 percent.” She described it all as “a warning shot for Democrats ahead of next year’s midterms.” 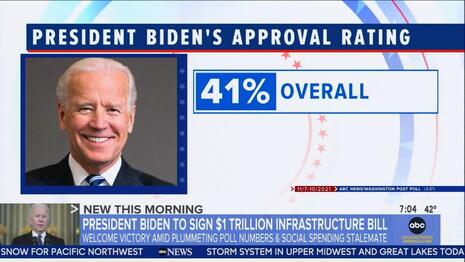 But beyond ABC journalists covering their own poll, it’s shocking that so did CBS and NBC. This is what it looks like CBS Mornings, Gayle King explained, “A new poll shows the President’s approval rating is at an all-time low, just 41 percent of those surveyed said they approve of the President’s job performance. Fifty three percent said they do not approve.” (Note: Biden is at 41 percent with all adults and 38 percent with registered voters.)

Below are partial transcripts. Click “expand” to read more.

RICK KLEIN – This poll was a major blow for Joe Biden’s Democratic Party. It paints a picture of a party that seems disconnected from the lives of people. More than 62 per cent of respondents believe the Democrats do not support them. It’s an exciting week for this, as we are just one day from President Biden signing the infrastructure bill. You’ll have one of the rarest sights in Washington, a bipartisan signing ceremony, Democrats and Republicans together. But in this poll, Whit, we asked people “would you rather see the Republican or Democrat win in your district.” The Republican candidate has a 51-41 edge among registered voters. In the generic ballot question, we have not seen a Republican win by such a large margin.

CECILIA VEGA: The new ABC News/Washington PostA poll has shown that President Obama’s approval ratings have dropped to just 41%. This is despite him losing support from both Democrats and Independents, with his economic handling approval dropping to 39%. These are alarming numbers for Democrats in the lead up to next year’s midterms.

GAYLE KING: As his popularity sinks, President Biden is set to sign into law a $1 trillion-plus infrastructure bill. New polls show that President Biden’s approval ratings are at an all time low. Only 41 percent of respondents said they liked the President’s job. 50 percent did not agree.

ED O’KEFE: Good morning, Gayle. Happy Monday. We are glad to have you. Although the White House calls this bill infrastructure legislation once in a lifetime, a new poll has shown that Americans are increasingly unhappy about the economic state and inflation. He is hoped to change those figures, according to his aides. He might find a way to convince his fellow party members to approve part 2 of his ambitious economic agenda.