“Those colonizers deserve a slap in the face.”

As the Cathedral of Notre Dame burned in Paris on Monday, many Americans expressed sorrow without regard to religion, race, or politics.

However, there was also significant liberal backlash to that sentiment on social media. Commenters accused those who were upset about the blaze of racism – with some calling the iconic cathedral a symbol of colonialism and white supremacy.

WATCH: Ocasio-Cortez Has a Plan to Take Back the Supreme Court – It’s Peak Socialism

Many were indignant the recent burning of three black churches in Louisiana – allegedly by the white son of a local deputy sheriff – had not received the same amount of attention.

Everyone: "THIS IS A TRAGEDY!"

The GOPers tweeting their “sadness” about the tragic fire in the Notre Dame Cathedral never once mentioned their sadness about the 3 historically black churches being burnt down by a White Supremacist who is also the son of a sheriff.

As we watch in horror the fire at the Notre Dame Cathedral, let’s not forget three Black churches in Louisiana burned down by son of the Deputy Sheriff. Don’t turn a blind eye.

Give what you can and let’s help restore these houses of God. ?: @nytimes https://t.co/GMcAz2fFER pic.twitter.com/02enU0jEP6

A lot of social media users singled out President Donald Trump and Vice President Mike Pence for joining other world leaders and people around the world in mourning the damage to Notre Dame.

Trump was very quick to tweet about the fire at Notre Dame so I guess it’s safe to assume the fire wasn’t started by a white cop’s son and Notre Dame isn’t a black church in America.

I don’t remember Pence ever mentioning the three historically black churches that were burnt down by a white supremacist/domestic terrorist. Speaks volumes.

Similar condemnations were directed at other Republicans.

The GOPers tweeting their “sadness” about the tragic fire in the Notre Dame Cathedral never once mentioned their sadness about the 3 historically black churches being burnt down by a White Supremacist who is also the son of a sheriff.

Some people cried “Eurocentrism,” complaining that not enough attention had been given to the destruction of houses of worship elsewhere in the world. A number of commenters went as far as cheering the Notre Dame fire.

While the world is crying for the burning of Notre Dame in Paris, I can’t stop thinking about Haiti, America and Africa and how all the Thousands of years of Art and History have been burned and destroyed by the hands of white people… I hope that Bitch Burn to dust… #RGB

Let Notre Dame burn to the foundation stone as long as no civilians are hurt. Those colonizers deserve a slap in the face, we ain't fogiving you french colonizing pr*cks for nothing.

Nobody even died in Notre Dame, others complained – though a firefighter and two police officers were injured during the massive 12-hour effort to extinguish the flames. The spire and much of the roof were also destroyed. 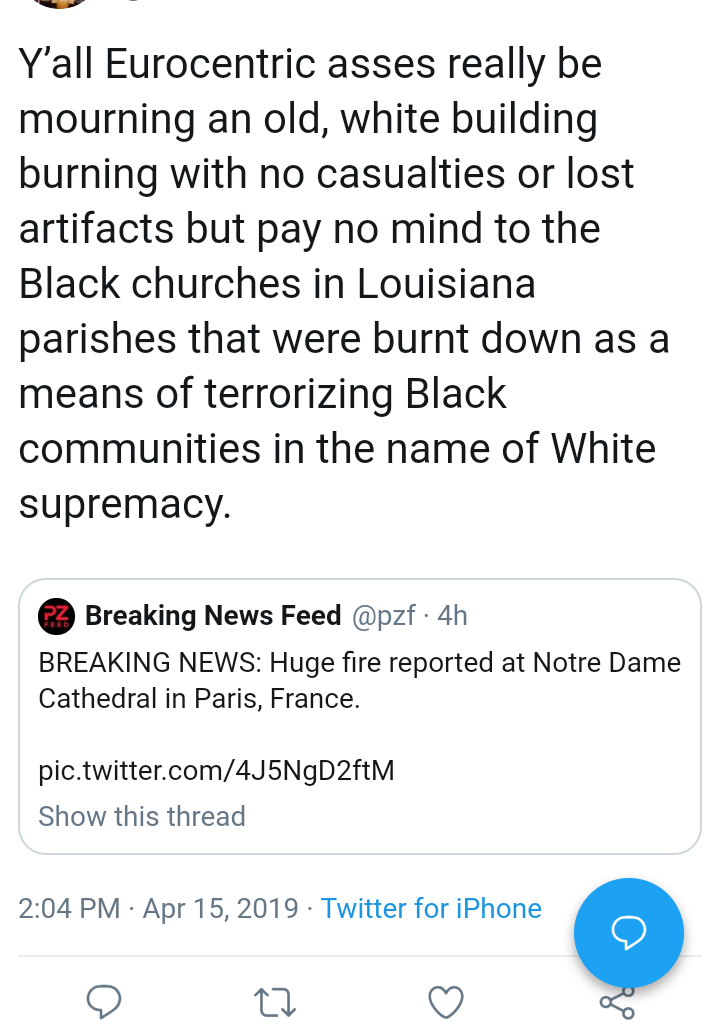 Quite a few commenters wanted to talk about a small fire that briefly broke out Monday at the Al-Aqsa Mosque in Jerusalem.

call me muslamic and all but masjid al-aqsa was literally on fire the same time notre dame was, and i’ve seen nothing about it?? stop with this eurocentric bullshit and pick a narrative.

Others were mad about the destruction of culture across the Middle East.

this is probably a savage opinion to have but i really dont care about notre dame that much i stopped having feelings when they destroyed every cultural relic in iraq, syria, etc

Still others pointed indignantly to the Chinese government’s razing of Uighur mosques.

the horrible Notre Dame news has also made me think of the historic mosques that have recently been destroyed in China, as part of the ongoing attempt to destroy the Uighur culture https://t.co/VJdHv9SYlb

Then, there were the anti-colonialist takes.

Absolutely horrible about the Norte Dame Cathedral fire. Yet I can’t help but notice the Eurocentric tears saturating the media landscape. We should also be mourning the countless Native American sites destroyed by Euro selttlers across the entire United States.

A contingent of liberals suggested that the French deserved to lose Notre Dame because of their colonialist past, which started centuries after the medieval cathedral was built.

It’s a shame that the French bombing Syria and its ancient architecture didn’t get this much coverage. Karma is a bitch, or in French, le karma est une chienne. #NotreDame

hi if youre pressed at people not caring that the notre dame was on fire pls let me remind u that the french colonized and destroyed so many cultures. karma really got its kiss !

At least one Twitter user faulted French “white supremacy” for preserving the cathedral in the first place.

like we can both talk about the cultural landmarks the french themselves have destroyed and the inherent white supremacy in the upholding of notre dame and also like, allow ourselves to be devastated by the loss of an amazing and historic piece of architecture
it’s not that hard

For their part, conservatives called out the liberal commentary, suggesting it reflected poorly on the left.

However, some commenters on the right offered ideological takes of their own. Refusing to accept official declarations that the cause of the fire remains unknown, and the operating theory is that it was an accident, they connected the fire to a recent spate of thefts and vandalism at French churches or to attempted Islamist terrorist attacks in the past.

Glenn Beck speculates on the Notre Dame fire: "If this was started by Islamists, I don't think you'll find out about it." pic.twitter.com/Yvq5iRdUCw

Others blamed Muslims or called for a white uprising.

If the Nortre Dame fire serves to spur the White man into action–to sieze power in his countries, in Europe, in the world–then it will have served a glorious purpose and we will one day bless this catastrophe.

WATCH: Ocasio-Cortez and Socialism gets Scorched with Facts