Here’s an oddly-recurring cultural litmus test: Soon after a news outlet hires a journalist, racist statements from the journalist’s past resurface. Should the journalist be fired?

For The New York Times — and many on the left — the answer depends on another question: Which group was insulted?

On Wednesday, The Times ​announced the hiring of Sarah Jeong, formerly a senior editor at Verge, as a technology and opinion writer. Thanks to the genius of the web, ​a notably large number of old tweets by Jeong disparaging white people have soon-after come to light.

Her tweets included statements like “#CancelWhitePeople,” “White men are bullshit,” and a comparison of whiteness to dog urine. (Yes, seriously.) 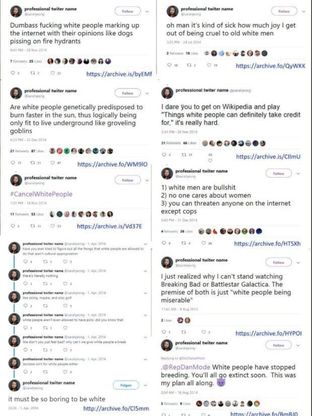 The Times ​responded on Thursday to the controversy, saying the editorial board had already vetted Jeong’s tweets and — after “candid conversations” with her — decided to keep her anyway, “confident that she will be an important voice… moving forward.”

In her own statement issued through The Times, Jeong explained her tweets as “counter trolling” — a reaction to abuse she had experienced herself on Twitter.

The double standard: Slate’s legal reporter Mark Joseph Stern described criticism of Jeong as “smearing” and tweeted that The Times should have avoided even the semblance of an apology and simply announced: “We do not terminate employment on the basis of old tweets.” He added that “The Times could’ve set an industry standard.”

But Stern — who’s usually a careful and astute commentator — followed a different standard a few months ago. In April, Stern praised The Atlantic for ​firing newly-hired conservative writer Kevin Williamson, who had in the past opined that women who got an abortion should be hanged.

Stern criticized The Atlantic for hiring Williamson in the first place. “This was an embarrassing failure of due diligence,” he tweeted.

I think everyone knows what the industry standard is already, Mark. pic.twitter.com/MaHo4d6nrv

Jessica Valenti, one of the reporters who in April had urged The Atlantic to fire Williamson, didn’t see any ethical complexity in Jeong’s hiring. (Valenti’s dichotomy of good and evil was later ​chided by New York University professor Jonathan Haidt.)

Sarah Jeong is good, her haters are bad (terrible, even). It’s not difficult.

It’s this discrepancy, more than Jeong’s actual tweets, that conservatives find galling. To make matters optically worse, Jeong’s predecessor, Quinn Norton, had been fired — on the same day her hiring was announced — due to (you guessed it!) old tweets.

In the resurfaced tweets, Norton had used the N-word and a derogatory word for homosexuals, and had seemingly engaged in conversations with known Neo-Nazis.

However, as Wired noted at the time, Norton’s story is “​complic​ated.” The N-Word was a poor retweet. The gay-slurs were used, according to Norton, out of a sense of her own belonging to the queer ​community. Her chats with the alt-right were, she said, part of her reporting.

Whether or not Norton’s explanations are acceptable, they certainly are not worse than Jeong’s. But by The Times’ standards, Norton deserved to get booted, while Jeong hardly received an admonishment.

To be fair, it would be absurd to argue that Jeong’s old tweets, miserable though they are, belong on the same continuum of bigotry which minorities in the US had historically suffered (and with which many still struggle today).

But does that mean that current expressions of hate towards different groups should come at different social costs? And should this exchange rate mean that explicit hostility towards white Americans comes with impunity?

Stern, Valenti, and The Times seem to think so. They endorse a zero-tolerance policy for all expressions of bigotry, while carving out one big exemption. What they might believe to be a reasonable remedy to historic wrongs may end up feeding the very evil they hope to extinguish. For the alt-right — like any other group playing identity politics –nothing is more nourishing than new grievances.