Gerard Butler​ tweeted on Monday a video of his own California house succumbing to one of the multiple wildfires ravaging the state. Many of his liberal followers, not so keen on the star’s openly pro-Israel position, think he had it coming.

1/2 Driving around Point Dume on Saturday. My heart aches for all those who lost their homes and their lives in California. I was one of the lucky ones, my home was only partially destroyed. A lot of people lost everything and will have to rebuild from scratch. (tweet continued) pic.twitter.com/cS4UTlRR00

“My heart aches for all those who lost their homes and their lives in California,” Butler tweeted about the spreading conflagrations that has ​already ​taken 42 lives. “I was one of the lucky ones, my home was only partially destroyed.”

Yet a good number of commenters saw little need to show sympathy to Butler. In fact, rather than weighing in on the Scottish actor’s personal loss or, better yet, on the ongoing inferno that has already been ​pronounced as the deadliest in the state’s history, many tweets were tellingly fixated on Butler’s fondness towards the Jewish state, about which he has ​never been shy.

What you are experiencing here is everyday life for the people of Palestine. Maybe your friends in the IDF will return your fund-raising efforts.

At best, these commenters judged the burning of Butler’s home as a non sequitur.

I dnt enjoy what happened 2 u, I actually feel sorry for anyone who would lose home… this happens on daily basis for Palestinians by IDF that u just helped n raising 60M for them.
I hope you will be able to rebuild ur home&overcome this…as well as all people around the world

But the more putrid comments carried the distinct stench of gloating proper.

Its called KARMA… the photo says it all pic.twitter.com/NjOsH0Q0tl

“It’s called KARMA,” wrote one user. “The photo says it all.” (Said incriminating photo is of Butler posing with soldiers of the Israeli Defense Forces.)

Indeed, what goes around comes around. pic.twitter.com/QBarLOE7EE

​​Those more inclined to the possibility of spiritual growth see the catastrophe as an opportunity for Butler to ​seek moral edification.

Perhaps you might take some time to think about how the thousands of Palestinian families who have had their homes and even schools destroyed by the IDF – that you have bizarrely and inhumanely raised funds for – feel?

See, over the summer Butler made his ​fifth visit to Israel — the sight-seeing, sun-catching kind.

“I try not to get into politics too much,” Butler told the Israeli Channel 2. “All I know is I love Israel, and I love visiting here.” (In morose irony, he had also jokingly ​told Israeli news website Walla! that he loved Israel so much that one day he might “ask someone to burn my house down in Los Angeles so I won’t have anywhere to go back to.”)

​​That in itself probably crossed a line for a swath of Butler’s audience. But for Israel’s critics, his unpardonable offense was participating (alongside Pharrell Williams and Ashton Kutcher) in a ​fundraising gala earlier this month that had successfully raised more than $60 million in support of Israeli soldiers. Note the following tweet, which enjoyed the likes of almost 300 users who apparently agree that it is condign punishment for participating in the gala for Butler to have his home consumed by flame.

You should have put away some of the $60 million you donated to the IDF to destroy more Palestinian homes! Bad call..! Ask Israelis to help u rebuild…!

Twitter’s intrinsic rot notwithstanding, it takes a special kind of zealotry to revel in the personal misfortune of an ideological enemy. It’s the sort of pious sadism you might expect coming from religious fundamentalists, not from the supposed defenders of the oppressed. What a sorry excuse for moral resistance you are, if “karma is a bitch” is the best you can do. 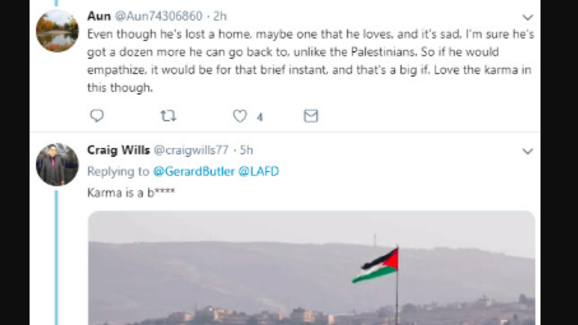 Feminist Analysts: ‘Macho’ Work Culture Will Lead to Technology That Discriminates Against Women