It’s newsworthy when a comedian takes a stand against Cancel Culture.

Comics are often either silent about the topic or in some cases, they get involved.

Trevor Noah finally speaks out about the topic. It seems that he would like to be among Gervais, Cleese and the rest.

It’s not happening so quick.

Low-rated host Daily Show, talking to Variety’s “Awards Circuit” podcast, defended Kanye West against his many critics. That’s interesting because Noah himself is one of them.

Noah was also a fan of Cancel Culture but didn’t name it.

“I think we have gotten very comfortable discarding human beings, immediately tossing them away and making them irredeemable characters … When in fact, I think all of us should be afforded the opportunity to redeem ourselves. All of us should have an opportunity at redemption.” 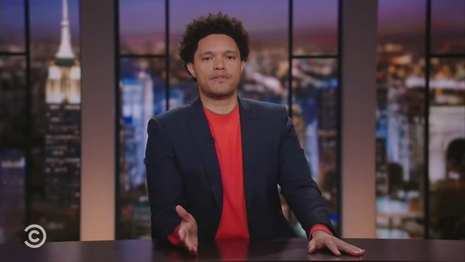 It reminds us how Noah’s old, “problematic” jokes magically resurfaced when he first took over for Jon Stewart on The Daily Show. Noah survived the cancellation.

Are you concerned about more terrorist attacks coming his way?

Noah came to embrace a more balanced view of public personalities later, making sense once again of the world.

He’s right, of course. He’s also part of the problem.

Why? He’s less than willing to use his platform to be part of the solution. Noah ought to be presenting his Cancel Culture case front and center before his faithful but not large group. Daily Show crowd.

He has a bully pulpit, and he’d rather use it to pummel GOP targets.

Now, compare that to Bill Maher’s relentless assault on Cancel Culture and its woke ilk. The progressive star of HBO’s Bill Maher – Real Time uses that platform on a near-weekly basis to smite woke ideology, a critical factor in Cancel Culture’s rise.

Maher didn’t trade in his progressive beliefs to do so. He also doesn’t fear that these stances might hurt his ratings.

At this point, how much smaller could Noah’s audience become?

[Cross-posted from Hollywood in Toto.]