Shortly before Easter, Russia’s Foreign Minister Sergei Lavrov announced that the initial phase of the “special military operation” in Ukraine was over, and a new phase was starting. The “new phase” was focused on seizing control of the historical borders of the Donetsk and Luhansk Oblasts that make up the Donbas region. To support that objective, the Russian advance on Ukraine’s northern border, in the direction of Kiev, was terminated. These units were pulled from combat and sent back to Russia or Belarus for reconstitution. Then they moved on to the Donbas front.

The Russian military invaded Ukraine in 57 days. The timelapse below shows how the Russian army moved and controlled Ukraine during those eight weeks. You can view the fullscreen version of this video as some annotations from earlier days may not be as obvious. pic.twitter.com/8VIrNGRkuP

While that was taking place, I shared my thoughts on what the future holds. Ukraine’s Future Depends on These Three Fights That Russia Must Win. That post described three distinct battles, which I believed Russia needed to win.

There are three battles that could decide the fates of Russia and Ukraine. pic.twitter.com/2UGhpeEC3u

Since that time, we’ve had new information. We’ve learned that the Russians intend to conquer Odesa and the Black Sea coast while creating a land bridge that goes beyond Crimea and terminates in the “breakaway” Russian dominated “republic” of Transnistria (Putin Decides to Widen the War With Ukraine to Achieve His Objectives).

We’re now two weeks into the new phase, so let’s take a look at what’s happened.

Focus on the red dashed line, which indicates where Russian troops have been operating. There are many towns that change their hands in this region. Some success has been achieved by the Russians in repressing a Ukrainian offensive within the black/green circle. Some success has been had by the Ukrainians in the quadrant to the right of the map. For now, this area is in equilibrium. Russians wish to deploy large numbers of troops in the north-west and to launch an offensive from there, as part of their goal to seize control over Donbas. Because of the persistent pressure by Ukrainian forces from the west, they cannot move that number of troops to the northwest and launch an attack there.

An important event could have occurred overnight.

DIRECT ACTION Speaking as a SEAL, this was a professional demolition job, targeting the bridge span at the juncture of the abutment– making repairs difficult. https://t.co/GxrtEQJgPj

From Crimea and Kherson to Donbas, there is only one railway line. That is all. It is now possible to transport supplies and other equipment by automobile, instead of rail. Kherson will see a reduction in logistical support.

Mariupol still needs to be protected. Instead, the defenders found shelter under an iron mill to resist a nuclear bomb and were forced to retreat into bunkers. 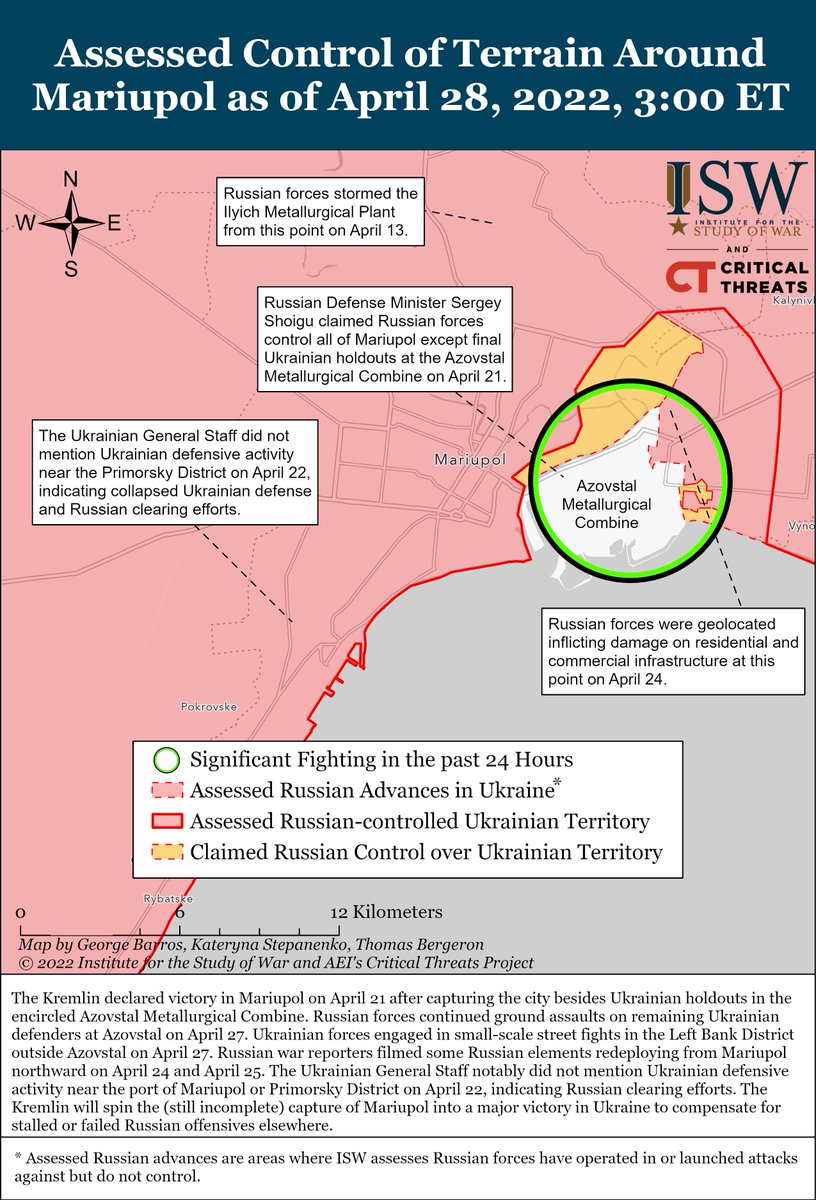 So, this is what I said.

It is crucial to take Mariupol because about 12 BTGs remain engaged in the reduction of Mariupol’s defenses. Putin and Russia’s high command want to remove them and move them to Donbas. Putin ordered that the steelworks be sealed. It is clear that the Russian soldiers in Mariupol will be able to organize a perimeter around these steelworks. The perimeter won’t be more than one man deep so an additional mobile reserve is necessary in order to stop the defenses from escaping. The bottom line is that most of the BTGs will remain where they are.

You can see that Mariupol is located astride Donetsk’s main road to Kherson. If Kherson falls, and Mariupol’s defense forces continue to hold, or worse, break out then Russian forces between the two cities may be cut off. The scene for intense partisan activities is located in the brown, cross-hatched region north and west Mariupol.

In short, while the Russian might like to leave a light screening force in Mariupol and move most of their troops to Donbas, they can’t. While they have won the fight, they can’t leave their existing units standing. But they must resist the temptation of moving most of the troops to the Donbas to join the fight. I doubt it.

To evaluate the battle, we have an metric.

The battle for Mariupol isn’t over, despite some 🇷🇺 troops leaving. 🇷🇺is continuing to strike the city with a series of withering strikes.

The video shows that Russia’s main combat force is Chechens with some Russian naval infantry as well as Donbas militia. If accurate reports, it will reduce pressure on Mariupol defenders. The dozen Battalion Tactical Groups or BTGs that were freed will only generate limited combat force.

This is the Clausewitzian battle schwerpunkt. It is the decisive locus in the campaign. If Russia can’t gain control of Donbas, nothing else matters. 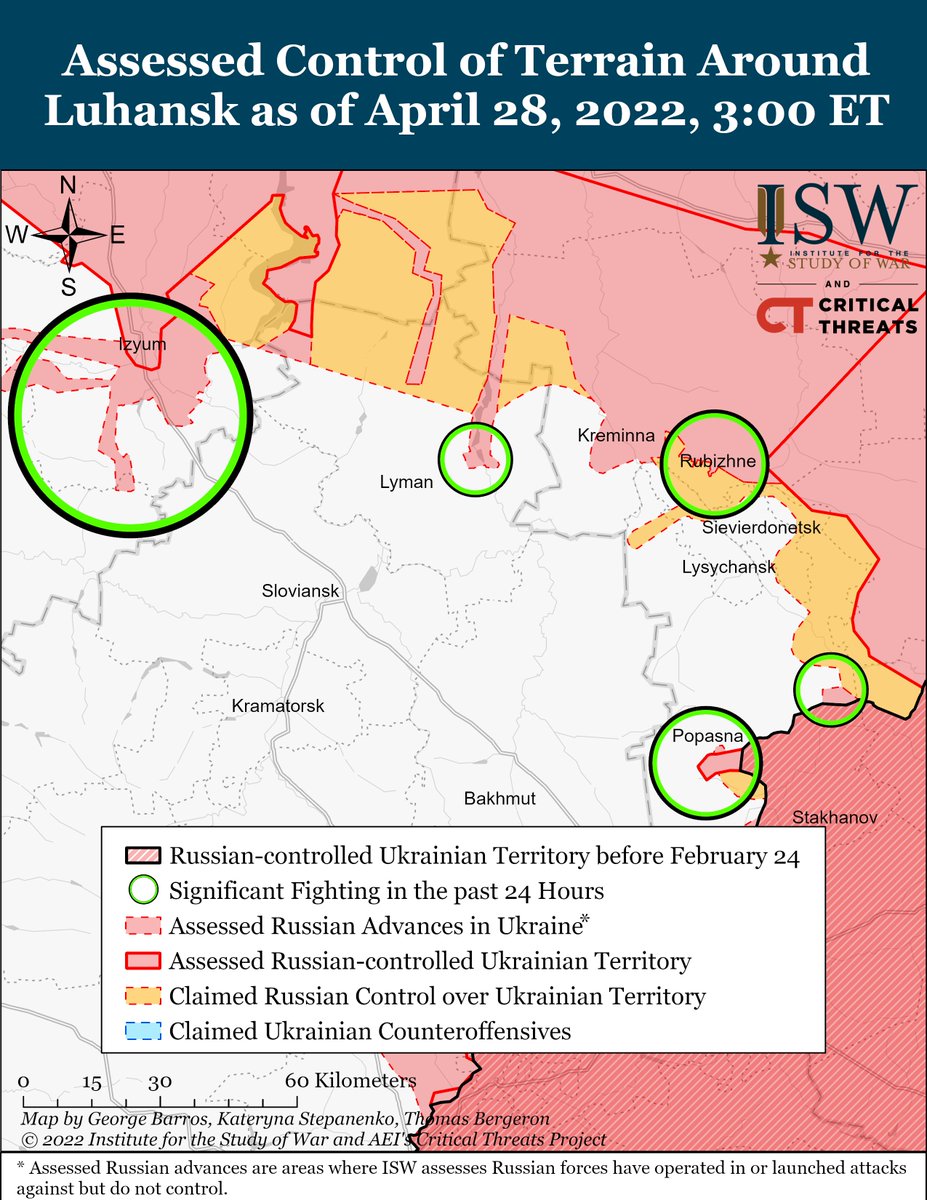 There is more to this initial plan that seemed to involve creating a double envelopment between the salients in the south and north. The Russians instead have made slow and methodical advances, seeming to limit their attack based only on the available resources. The Ukrainians seem to be reluctantly giving in.

Russians have the key terrain piece in Sloviansk, which is also responsible for controlling the Sloviansk – Kramatorsk highway. This will allow the Russians to disintegrate the Ukrainian defense that was threatening the puppet republic Luhansk.

One problem is supply; the other is the ongoing Ukrainian offensive towards northwest. 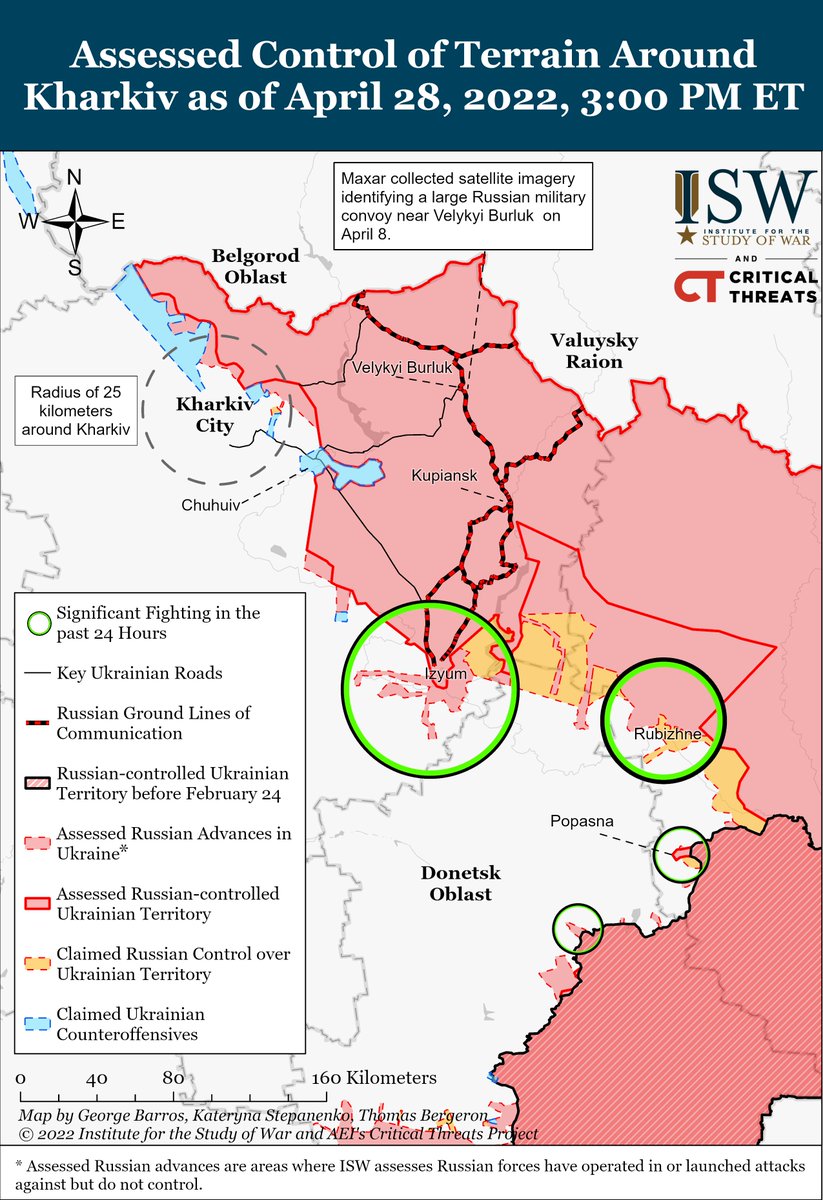 This map clearly shows that advances by either side can only be as large as the road used. Kupiansk (the Russian highway and the railway lines providing the Donbas offensive are the most important terrain) is the main territory. This center is within easy reach of the Ukrainian offensive. So as much as the Russians might like to ignore it and push ahead in Donbas, they can’t. All movement south will stop if Kupiansk is under artillery firing. Russians fear a disaster if Kupiansk is destroyed. 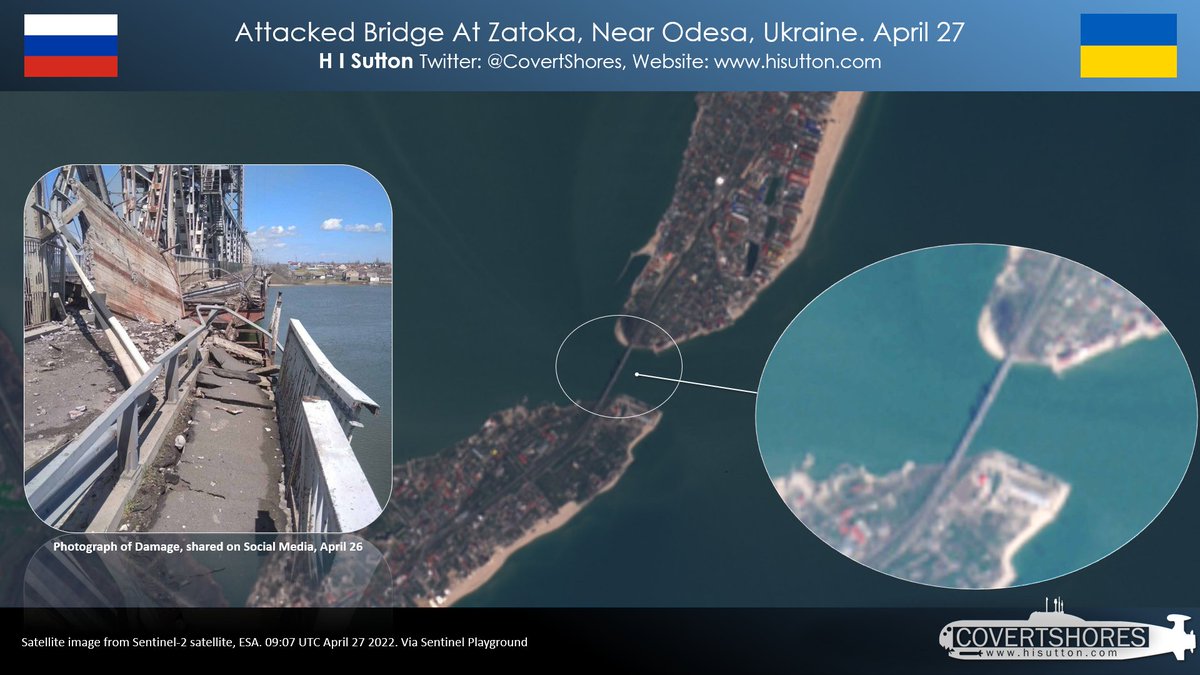 It is now impossible to import gasoline or consumer goods via Moldova and Romania because of the loss of this bridge.

There is also this theory.

No matter how creative or open-minded a military plan may seem, it is not easy to implement. Besarabia has a reputation for having bad roads, as well as a lot of creeks, rivers and swamps. As it impacts directly on the Nato frontier, this operation may also encourage Nato to increase military support. /END

Personallly, this seems a bit ridiculous. I don’t see how the Russians do an over-the-shore operation with the assets, both ships and troops, available in theater. I don’t see how they sustain the presence of an invasion force. It is possible if Russia convinces Transnistria that it will launch an attack against Moldova and link up with the invading force.

Bulgaria officially urged its citizens not to return to Moldova.

Israel has urged its citizens not to return to Transnistria. pic.twitter.com/WQZcVSF5f8

After the Moldavian Breakaway Region of Transnistria banned all men between the ages of 18-55 from leaving the “Country” earlier today, the Transnistrian Ministry of Defense has reportedly ordered a General Mobilization though the Supreme Council is yet to approve the Order. pic.twitter.com/D9qhBxG2u8

The Ukraine has received an extraordinary amount of ammunition, including Javelin and Stinger as well as loitering munition like Switchblade and artillery. More than 200 M-777 towed howitzers with a slingshot have been pledged. About half have been delivered and the Ukrainian gun crews remain in training.

You will also see a number of tanks on your way (see Ukraine Now has More Tanks than Russia and Things Look Worse in the Future), and my favourite, the M-270 Multiple Rocket Launch System.

But, the catch is that Ukrainian troops must be trained in new technologies. They are therefore being pulled from combat. Additionally, Ukraine’s supply of 152mm ammunition has run out. Russian-spec artillery ammunition can also be difficult to locate, unlike small arms ammunition.

NEW: The UK has been “scouring the earth” for 152mm artillery ammunition – the ammunition Ukraine’s military needs for their existing guns to combat Russia, defence minister @JSHeappeyTells @SkyNews

Russia does not have the logistics and combat capabilities to make Operation Bagration-style advances. I believe that the Ukrainians traded time for real estate and did not want to sacrifice their manpower to fight it out in this phase of Operation Bagration. If Ukraine conducts a delay operation, attritting Russian forces while avoiding decisive engagement and significant losses, the new units being formed and new equipment can be brought to bear at a decisive place and time of Ukraine’s choosing.

If the Russians believe that there will be a substantial transfer of troops to Mariupol, this could prove to be a problem. Although the Ukrainian troops are located within 40 miles (roughly equivalent to being on the dark side or the moon), their threat to liberate Mariupol could divert resources elsewhere.

Kherson will host minor battles, with the towns shifting hands till the Transnistria business is settled. Ukraine should assume an attack will occur and the majority of its troops on the Transnistria frontier must be kept in check. It will likely be an inconvenience, not a major distraction, if it does happen. Transnistria is home to 1,400 Russians and 4,000 security personnel. None of them have a logistic base. It’s a weak sauce to invade a force. If this front is not given any, the new Ukrainian artillery might turn the tide.

The biggest takeaway is that we aren’t seeing much evidence that the Russian Army learned very much from the first 50 days of the invasion. Many operations are tried with insufficient troops. Combat arms still are being managed timidly. Russian units are not able to display the same panache and dash that you can see in their operational plans.

All in all, I don’t see much change from ten days ago. Accordingly, I believe my last week summary is still relevant.

The Russians find themselves in an extremely difficult situation, according to me. Defenders are strongly favored by the terrain they must attack in the northern regions. It will prove difficult for their supply lines to sustain the 70-80 BTGs. It is also an uphill battle against the clock. Every day more Ukrainian troops are formed and moved into the battlefield area. More heavy weapons also arrive. Russia has to find that sweet spot where their units have rebuilt back to combat effectiveness, and the Ukrainians haven’t yet begun to field the weaponry sent to them. They also, in my view, have to win all three of these battles–holding Kherson, sealing off Mariupol, and taking positive control of Donbas–to have a chance of gaining their territorial objectives. Ukraine has only one decisive battle to win: Donbas.