“Kids are taught that white is right and minorities are the source of evil.”

A California State University on Thursday held a “Whiteness Forum” dedicated to explicating how seemingly-innocuous elements of American culture ― from children cartoons to sports ― are in fact inlaid with racism.

​The ​annual conference is organized by the communications department at California State University San Marcos, and spearheaded by a course titled “COMM 454: The Communication of Whiteness.” The event exhibits projects developed by students, each addressing exigencies of bigotry in American culture.

One student this year undertook a critical evaluation of “VeggieTales,” a children’s cartoon in which the friendship of a tomato and a cucumber overcomes adversity while reaffirming traditional Christian values. The verdurous show was condemned in the forum as racist for presenting some of its villains as having ethnic accents, The College Fix reported Monday. 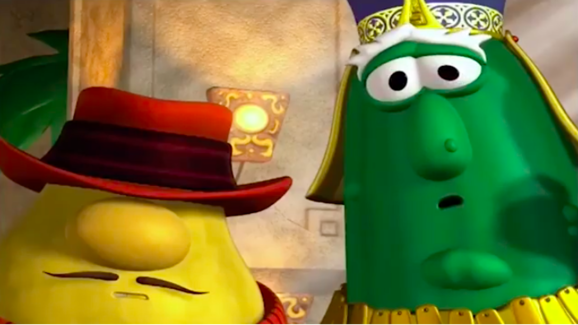 “When kids see the good white character triumph over the bad person of color character they are taught that white is right and minorities are the source of evil,” the project title card read, according to The Fix. “‘VeggieTales’ and other like-minded works have made the good messages in the Bible dangerous.”

Really? In one episode of the show, the animated cast presents an interpretation of the Book of Esther in which the wicked Haman is interpreted as Mexican marauder with a cringe-worthy Hispanic accent that makes Speedy Gonzales sound authentic. It may not be tasteful, but how it is dangerous is unclear.

Aside for “VeggieTales,” the forum also deconstructed the NFL, accusing the sport, according to The Fix, of perpetuating racial power structures by letting white coaches order around their black players. Another trendy topic was the culpability of white women in the spread of white supremacy, a subject with which even the mainstream left has been developing ​a bizarre obsession since the election of President Donald Trump.

If nothing else, the forum, at least as described by The Fix, captures what critics see as the tendency of many humanities departments around the country to dwell on cultural trivia in an insatiable crusade to uncover traces, no matter how faint, of bigotry.

In 2012 journalist Naomi Schaefer Riley, then writing for the Chronicle of Higher Education, ​inveighed against the proliferation of these academic disciplines.

Seriously, folks, there are legitimate debates about the problems that plague the black community… But it’s clear that they’re not happening in black-studies departments. If these young scholars are the future of the discipline, I think they can just as well leave their calendars at 1963 and let some legitimate scholars find solutions to the problems of blacks in America. Solutions that don’t begin and end with blame the white man.

In response to her post, by the way, the ​Chronicle terminated Riley’s blog.