“They always have the temptation to revise history…”

The criticism is not of what’s actually in the film, but what isn’t: Namely, the planting of the US flag on the moon.

First, there’s Douglas MacKinnon. He served in the White House as a writer for former Presidents Ronald Reagan and George H.W. Bush, and later in a joint command at the Pentagon. MacKinnon said “First Man” failed to portray Neil Armstrong’s true patriotism.

“Hollywood is dominated now, unfortunately, by liberals. And because of that power, they always have the temptation to revise history or to in fact bend history to reflect their current political views,” MacKinnon said on “Fox & Friends” on Monday.

And he’s not the only one to fulminate.

In these crazy times we can at least be grateful that #FirstManMovie didn’t make Neil Armstrong a gay Native American who planted a rainbow flag on the moon #WishfulProgressiveHistory pic.twitter.com/FtvKVxPWbH

This is total lunacy. And a disservice at a time when our people need reminders of what we can achieve when we work together. The American people paid for that mission,on rockets built by Americans,with American technology & carrying American astronauts. It wasn’t a UN mission. https://t.co/eGwBq7hj8C

This isn’t the first time that conservatives have used the American flag as a prop in their war on liberalism.

Remember how they framed NFL ​​protests against racial injustice and police brutality as a protest against the American flag? That was fun. (You know, just like Rosa Parks was protesting public transit by refusing to sit in the back of the bus.)

But what’s really going on with “First Man,” and why isn’t that iconic scene of Armstrong planting the flag on the moon included in the film?

Was the director trying to make a political statement?

Did Betsy Ross know when she was piecing together the first American flag that she was sowing the seeds of modern division and discontent?

When interpreting pieces of art from bygone eras, sometimes we rely on conjecture from historians and philosophers to understand if there is a hidden message or political undertone being conveyed by the artist. Professional critics and average viewers alike have debated endlessly about the story behind the Mona Lisa or whether Stanley Kubrick was trying to tell the audience something through his more enigmatic films.

Unfortunately, da Vinci and Kubrick aren’t around to shed more light on the mysteries surrounding their work.

If only there was a way to get inside “First Man” director Damien Chazelle’s head to see his true intentions.

Oh, wait. There is. Someone just had to ask.

In an ​interview to the Los Angeles Times last week, Chazelle explained that due to the nature of the story he and his crew were telling, they couldn’t go through every detail.

They wanted to examine the moon landing from Armstrong’s personal perspective, not through the prism of its well-known lionization.

The flag was not a private, unknown moment for Neil. It’s a very famous moment and it wasn’t Neil alone… We only wanted to focus on the unfamous stuff on the moon… What was important to us was that mysterious 10 minutes that Neil spent alone at the Little West crater, the walk that he took to that crater separate from Buzz [Aldrin] — during which time, of course, we wanted to look back and see the flag standing proudly by the LEM [lunar excursion module], which we showed in several shots. Neil never really talked about what he did at that crater or what he was thinking about. And in terms of the process of being on the moon, I think we were exclusively interested in the private and the less knowable.

“To address the question of whether this was a political statement, the answer is no,” he said after the film’s premiere in Venice.

And there we have it. Mystery solved. Crisis averted, right?

D’Souza, always the Twitter troll, couldn’t get past his outrage, even after Chazelle’s explanation. Because, why not? (D’Souza is currently promoting his own pro-Trump propaganda ​film, but surely that has nothing to do with why he’s pushing so hard for attention.)

The left pretends American flags were not important to the moon landing. Yet the makers of #FirstManMovie went to the trouble of cut them out even from the astronauts’ uniforms. The symbolism was clearly important to them!

Hang on. So, did the makers of “First Man” really go to the trouble of removing the American flag from astronauts’ uniforms?

Hmm. That sounds bad. Maybe D’Souza is onto something, after all.

There’s photographic evidence from the “First Man” trailer that proves that D’Souza either has no idea what he’s talking about, or he’s lying. 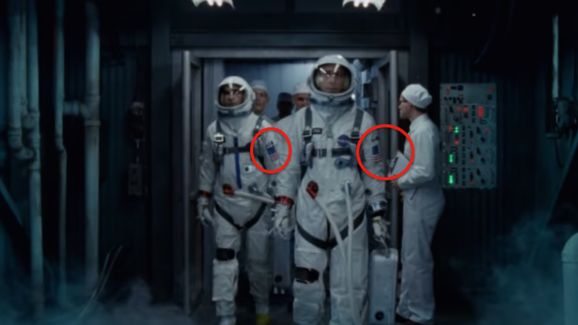 Why actually watch the work of art you’re criticizing, right? Too many propagandistic hero-worship films to produce, too many white-collar crimes to commit.

At least while we’re waiting in vain for D’Souza’s retraction, we can observe some the ridicule he and his followers have received on Twitter.

#FirstManMovie doesn’t have the scene where they plant the American flag on the moon?

Don’t worry, “Superman IV” has your back. pic.twitter.com/UfOVsBL47b

There, I fixed the flag-planting scene in #FirstManMovie to make whiney conservatives happy about how historically accurate it is.@DSChazelle @RyanGosling pic.twitter.com/yNcMb2JcyH

Maybe D’Souza should think about producing his own counter-film. He could call it “First Flag.” First scene: Old Glory being packed into a space suitcase. The rest of the movie: Old Glory waiting several days in the dark until finally being unfurled and impaled through the lunar surface.

Beat those liberal snowflakes at their own game, Dinesh, that’ll show ’em.

Look dudes, we all love America, but there comes a point where you’re no longer defending patriotism and only fighting over whose flagpole is bigger.

Adam Johnson is an editorial intern at Pluralist.

You can reach out to him at Adam.J.Pluralist@gmail.com